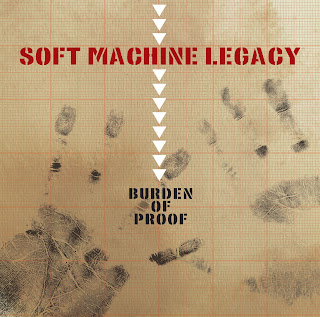 Soft Machine Legacy keeps on doing the impossible, seemingly against all odds. They make music worthy of the Soft Machine tradition, in spite of the tragic loss of key members Hugh Hopper and Elton Dean and the retirement of Mike Ratledge from the original band these many, many years ago.

The Soft Machine Legacy have made some great albums for MoonJune records and the newest one, Burden of Proof (MoonJune 052) is one of the very best. The latest lineup turns out to be a very lively one, long-time Soft Machine drummer John Marshall, Roy Babbington on electric bass, Theo Travis on reeds, flute and electric piano, and John Etheridge on guitar.

What made the Soft Machine special continues on. A composition-centered approach, their special spacey combination of jazz and rock, strong riffing, strong soloing, it's all still there.

John Etheridge sounds especially great these days on guitar. He has chops but he doesn't throw away notes--the speed is there for the linear curve of his soloing and he knows what to play when. He does. John Marshall is his usual dynamic-force self on drums. Theo Travis plays the sort of sax-reed solos that push the band forward and his keys give the band the Soft's sound in that much more reminiscent a way. And Roy Babbington has that unshakable solidity on bass that Hopper established as central to the band's identity. So there you go.

The material is strong and the playing is strong. They triumph again and I wouldn't just say that. It's a great disk.

Posted by Grego Applegate Edwards at 7:39 AM