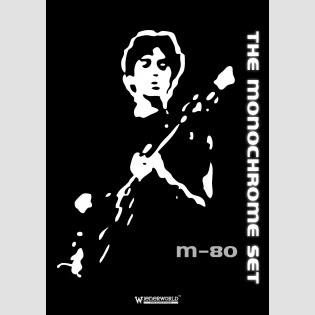 When punk and the garage revival came our way, I was so much somewhere else that I did not get it for a few years. I was on the fringes of rock, actively immersed in world-ethnic, heavily into the entire history of jazz, and ever exploring classical from Gregorian and Middle-Ages through to Stockhausen, so to me it was a "What the...?" kind of reaction. Later, I fully got the immediacy and frustration, the anti-booooooshwa thing going on.

So when things were cooking in that zone and bands were sprouting up all over (very healthy tendency) I'll admit I missed a few. One of them was The Monochrome Set and their Velvet-Stooges-Smiths primality. It was an English band. They had songs that came through with a slightly savage garage psych ambiance. Live they were sort of terrible, like tune-up?! But they were terrible in a very garage, artsy way, for sure. The lead singer/rhythm guitarist had a voice that cut through, a punk who almost crooned (like Reed, Iggy, Morrissey). So in 1979 they did a little tour of the States and in the process played the Field House at the University of Minnesota. Hence the DVD M-80, Live at the Marathon 80 Festival, Minneapolis, 1979 (Wienerworld 2567)

Their full set is captured in primitive black and white video and raucous audio. It's invigoratingly good-bad garage. The lead singer/rhythm guitar looks like he is playing a Univox semi-hollow, the lead guitarist gets an almost Chinese sounding lead with a sharp tone, and the rhythm section has that garage enthusiasm. If you are a fan of this band you will revel in this. If not, all I can say is that it captures a band that had verve and took garage into some kind of art zone, which was the point.

Those not into this sort of thing are not going to be converted. But you already knew that, right? I found myself profitably diverted for the 50-minute set.