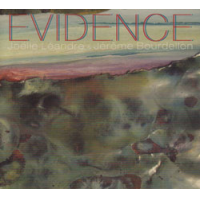 Not everything is everything. In fact some things aren't much of anything. Not true of Evidence (Relative Pitch 1010) by Joelle Leandre & Jerome Bourdellon. It is neither not much nor is it everything. Which means it is the right thing. What makes it right is the chemistry created by the two artists.

Joelle Leandre has been one of the premiere avant acoustic bassists for some time. She is marvelous, inventive, a sound-texture artist of the highest order, respected by her peers and critics alike. Jerome Bourdellon is not well-known to me but comes through on this recording as fully worthy of this major collaboration. He covers the contrabass flute, C flute, bass flute, bass clarinet and piccolo masterfully, giving Ms. Leandre a full spectrum of pitch zones to react against, which between the conventional pizzicato and bowed pitch ranges and those gained by harmonics, is just as wide.

We are talking about free improvisation here, as many would expect. And it's all about sound color and space, yes, but also about pitch sequences. Joelle is a master of such things and also a vocalist that has carved out her own style of out scatting, which she does at times here (and Jerome sometimes joins in with vocals too, effectively). Bourdellon keeps pace with Ms. Leandre, which is saying something. He has excellent tone control and sound generation inventiveness, yes, but also can run lines that go head-to-head with Joelle's prowess in that zone.

Marvellous duo! Beautiful playing! You won't be disappointed. It's very good in everything it does. And it's very worth having even if you don't seek to have everything!

Posted by Grego Applegate Edwards at 7:17 AM