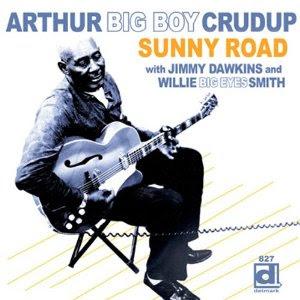 When something is right, was right, and will be right forever, you pretty much have nailed it, right? That's how I feel about Arthur Big Boy Crudup and his previous unreleased 1969 session, Sunny Road (Delmark 827).

We have Arthur in great vocal form, his guitar right there doing what it did in a way that was nothing extraordinary from a technical standpoint, but absolutely and totally right for what Maestro Crudup was all about. Then there is Willie "Big Eyes" Smith playing the drums in that same RIGHT sort of way. Then some other cats too and they are where Arthur wants them to be.

The studio chatter with producer and longtime Delmark icon Bob Koester goes a ways in explaining why the album was not released at the time. Arthur tells Bob that he only feels the medium slow blues that day and so that's what he does, song after song, gem after gem. It's the winding out blues, and it is the best. "Got a letter this morning, all I got is gone!" Man, do I know that! In two lines Arthur sums it up and sings it like it feels. And man, that doesn't feel good. Trust me. He sings the truth like that. Just right like that.

So you don't want to miss Arthur Crudup of course. But even if you know him well, this one sounds sooo good. It's just right. And that's all you need sometimes.