House of Love, She Paints Words in Red 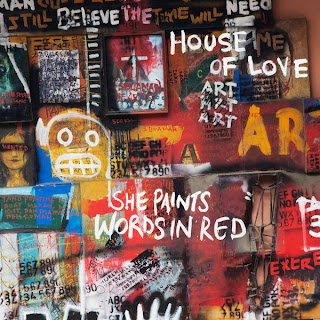 When I had to have a tooth extracted a few weeks ago, I spent some time in my dentist's office for several visits. They were playing what I assume was top-40 radio the whole time and I was taken aback. I just don't follow that genre these days for various reasons, partially because it has become somewhat marginalized with the burgeoning of niche programming. A big hit on top-40 these days--it's not a part of the national or world awareness in the top-to-bottom sense than it was when almost everybody listened to AM top-40 and knew all the songs, or at least I get that impression. There is a more specific target, others don't listen anymore so much, though they may know the sexy images of some of the "stars," no? Yeah and that's because the image is what matters now, not the music. But still, what I heard! Never mind what for now actually, it was what I did NOT hear. The influence of rock and r&b was not at all discernible, at least the 10-15 songs I heard. That came as a slight shock. It was homogenized synth pop of a pretty uniform, product-oriented, formulaic sort. I did not find much to like. It was a music churning machine thing and other than some hook there was nothing musically or song-wise that stood out. Rather awful.

I bring this up because today's CD by today's group might in another era have made it to the top-40 charts, with the right song. Like REM did even though REM had strength well beyond pop potential. OK so the House of Love group isn't pop. It's rock. But there are songs, real songs on the album She Paints Words in Red (Cherry Red 556). It's a strong singing going on too--maybe like mid-late Byrds slightly sometimes. There are good, straightforward lead vocals and nice harmonies when they go to that.

It's a guitar band in the combo-rock sense and there's decent playing going on, a decent lead guitarist too, though he doesn't play much in the way of solos and he isn't note-y as much as tasteful. The lyrics are more alt than trailer-trash dumb, and I suppose that's another reason the dentist's station would not find itself playing their songs. And given what I heard at the dentist, I don't imagine anything of substance would get played? So be it?

What matters is that there still is good alt out there if you look for it. This band sounds very good to me, for all that. There is a slight retro element but in the sense that the music has classic rock roots. So much the better since there don't seem to be widespread roots getting layed out into the earth in the mainstream today. It's worse than Bobby Rydell, baby! Worse than the sweet crooner bands of the '20s-'40s of last century. This ain't that and it ain't what's playing at my dentist's. I love my dentist but not her radio! This band would sound much better in there, novocaine or no.

Posted by Grego Applegate Edwards at 7:58 AM