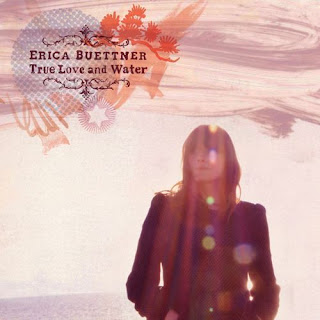 Who is Erica Buettner? She writes very good songs in a kind of sensitive folk vein. Joni Mitchell certainly has influenced her and in the right way. Erica doesn't imitate. She assimilates and gives out with her own music. She plays a decent, very appropriate folk guitar and banjo.

All this on her album True Love and Water (Peppermoon 001). Pierre Faa produced and arranged the music here, without doing so intrusively. There's a touch here, a touch there, but it's all about Erica's songs, her very nice voice, her folk picking. That is what is at the forefront, and nicely so.

It's that personal-poetic thing that makes you happy and sad at once. It's human music without pretension. It's a musical photo album (remember them?) of Erica, a sort of self-portrait in song.

And it's good. It will keep good company with you for many listens.

Posted by Grego Applegate Edwards at 7:47 AM