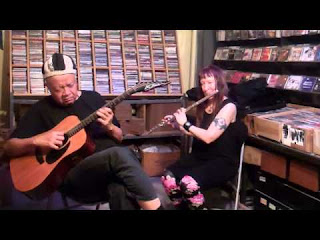 The meeting of flautist Cheryl Pyle and guitarist Bern Nix has led to some excellent sounds. They appeared for a live gig at Art of A Gallery some months ago and luckily the "tapes" were rolling. A nice recording of the gig is available for download as Beyond Duo (11th Street Music).

Many will remember Bern Nix as a key guitarist in Ornette Coleman's Prime Time electric band (RIP to the great Ornette). He's kept going, developing, unfolding his stylistic universe. On his duet with Cheryl here he plays an acoustic guitar, rolling out both lines and chords that skyrocket the music and give a challenging tapestry of sound that inspire Ms. Pyle to go forward to a realm most certainly "beyond."

Cheryl as always has a beautiful flute tone and an original improv-melodic concept that incorporates both new music and jazz elements. Bern Nix feeds her some very thoughtful and original spontaneities that allow the duo to soar and thrive in the process.

The harmonic and linear ideas Bernie expresses must be heard by anyone interested in the possibilities of freedom as made real on the guitar. Cheryl gets the inspiration to outdo herself and in the process we get 45 excellent minutes of DIY immediacy.

Do a Google to find the download. It's very worthwhile music!