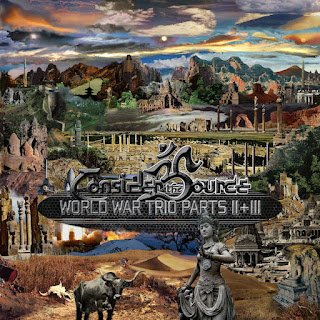 I get so much in the way of CDs by artists I don't (at that point) know that I have to refocus with every new one, since anything is possible out there. When I received the deluxe 2-CD package of the latest by power trio Consider the Source, I had no idea what it would contain, though the packaging was tasteful and intriguing in itself. World War Trio (Parts II & III) (Techne) took me a few listens to fully appreciate, but straight off I knew it was special fare.

According to the press sheet, Consider the Source's fans call the music "Sci-Fi Middle Eastern Fusion." Now that seems pretty righteous and accurate. It is the well-considered trio music of John Ferrara on four and five string bass, ukelele bass and banjo bass(!); Gabriel Marin on fretted and fretless electric guitars in addition to guitar synth, dutar, dombra, baglama saz, chattarangui, danbau, and yayli tanbur; and Jeff Mann on drums and percussion.

Fine. So that tells you the specifics. The music speaks for why all that is important. The compositional vehicles are generally intricate and expressive of prog-metal meets the middle-east and India.

All three musicians are top-drawer. Ferrara plays excellent bass. He thoroughly nails down the bottom end with chops and imagination but also functions as a solo entity at times, sounding great. Mann drums and percusses with drive and a sensitivity to where the band is going. And Marin...has some incredible ideas that deftly combine rock and the ethnosphere with originality and a complete melding of the polarities to a fine totality. He is one NOT to miss, really.

And that is so of the band x 3. The two CDs are filled with a great deal of music but nothing feels in the least bit unnecessary.

The music is hot, advanced, original, very musicianly and quite exciting. OK, so you are skeptical? Just hear this set a few times! Do not miss it.