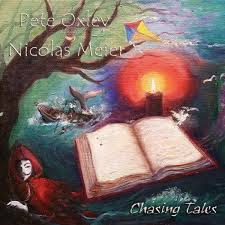 Sometimes, when all the chemistry is there and the moment is right, a duo recording can go beyond the ordinary and achieve a kind of orbital launch. The fuel and the rocket put together make for results that move forward in special ways. That analogy holds true for the meeting of guitarists Pete Oxley and Nicolas Meier on their album Chasing Tales (MGP 016).

Nicolas Meier has been playing with the Jeff Beck Group of late and does some very nice things on acoustic guitar, nylon-stringed and otherwise. He is well-schooled and has jazz, flamenco and mid-eastern influences in the mix of his own stylistic guitarisms. Pete Oxley started out in the UK as a rock guitarist, then shedded heavily under the influence of Metheny, Gismonti and Scofield to emerge eventually in his own right as a singular jazz artist. He plays both electric and acoustic on this duo effort.

The two together create an eclectically formidable melodic-harmonic amalgam of beautiful sound. They each contribute compositions notable for the interesting changes underpinning the solos. If you detect something of classic ECM spaciousness in this music, that certainly ramifies with what I hear. It is music that goes outward from the lyric sophistication of some of the classic jazz guitar sides made on ECM, but enters its own turf with fine original guitar playing from both artists. The solo-versus-changes orientation, featuring each artist alternately, gives us plenty of nice music and a close look at the solo styles of each. There are memorable melodic strains to be heard as well.

It's the sort of album you can listen to closely with great profit or put on to enter a twilight world of dreamtime beauty. But make no mistake, these are two guitarists that have a good deal going for them. You hear them out front and inspired on Chasing Tales.