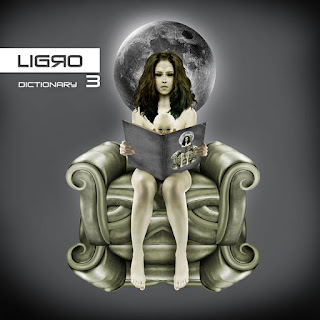 Indonesian guitarist Agam Hamza is something special as is his avant jazz-rock trio Ligro. They show us growth and fire on their third album, the second in international release, Dictionary 3 (MoonJune 072).

August 30, 2012 seems like ages ago, but that was when I reviewed their Dictionary 2 on these pages. They have continued to evolve, so that Dictionary 3 is further along, more and more accomplished and original.

With Agam once again is Adi Darmawan on electric bass and Gusti Hendy on drums. For the first tune they are joined by Indonesian keymaster Ade Irawan.

I remember a Rolling Stone review in my younger years (1970) of Soft Machine's Third, referring to them as "the thinking man's rock group." It got my attention and I bought the album, happily. In a way Ligro is the "thinking person's avant rock group." They too spend considerable effort to come up with their own sound, both compositional and improvisational. They too give the listener something to think about.

Agam plays a very electric guitar with close attention to an elevated electric sound and a colorful, thoughtful choice of notes. The third album makes that ever more clear and puts him in an increasingly original light. The bass playing of Adi and the drumming of Gusti complement what Agam does with driving, open, non-cliche musical sense.

Put the three together and you have something excellent to hear, outside the mainstream in intelligent ways, exploratory and adventuresome, yet with compositional heft. I love their avant rock adaptation of Messiaen's "Quartet for the End of Time," an excellent choice and sounding just right for some heavy sonics. But the whole album has that something about it that makes for absorbing repeated listening.

If you respond to something strongly out yet very driving in an advanced rock realm, this is for you. Agam is a key guitarist out there and the trio a key group. Their best yet. Hear it by all means.