Gao Hong and Friends, Pipa Potluck, Lutes Around the World 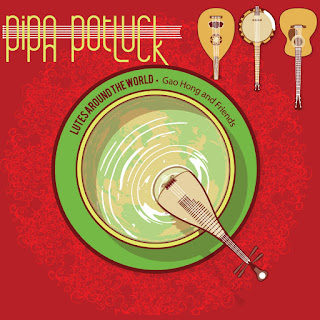 The convergence of music and the world has accelerated in the last century or so, thanks to modern developments in technology and transportation. Nowadays many musically inclined members of the earth's population have the opportunity to hear and appreciate diverse world music traditions that were once isolated to the regions from where they originated.

An excellent example of the convergent possibilities can be found in the recent album by Gao Hong and Friends, Pipa Potluck (Innova 916), subtitled "Lutes Around the World." Gao Hong is an excellent exponent of the Chinese lute named the pipa. She gathers for this recording some very notable players of other stringed instruments, mostly lutes by definition, from various world traditions. Gao and her friends produce a remarkable series of pieces that call upon traditions and create new music as well that combines such traditions in unprecedented ways.

Ms. Hong is joined by some fabulous players: George Kahumoku, Jr. on the Hawaiian slack key guitar, Jeffrey Van on guitar in the bluegrass tradition, the bluegrass-and-beyond fiddles of Darol Anger and Matt Combs, banjo by Alison Brown, Yair Dalal and Bassam Saba, both on the Mid-Eastern oud, plus bass (Gary West) and percussion (Dror Sinai and April Centrone).

This is a wonderful tribute to the flexibility of Gao Hong's musical approach and of course of all of her friends. We are treated to unusual combinations of Chinese, bluegrass, Hawaiian and Mid-Eastern music. Throughout we get some marvelous playing and some ingenious multi-cultural adaptations. It is great fun and seriously good fusion of the true sort.

Do not hesitate to get this. It's one-of-a-kind and a fabulous listen.

Posted by Grego Applegate Edwards at 6:10 AM