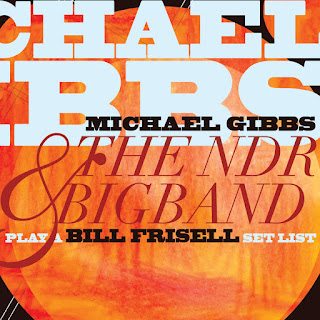 Michael Gibbs deserves more recognition as a jazz composer-arranger than he has been getting of late. Ever since the sixties he has given us some excellent charts. The NDR Big Band is one of the top outfits in Europe. Bill Frisell is a guitarist among the handful of major innovators active in jazz today. Put the three together and you get Michael Gibbs and the NDR Big Band Play A Bill Frisell Set List (Cuneiform Rune 400).

It is a beautiful showcase for Bill Frisell and his solo power, but it is also a masterful set of charts showing us Michael Gibbs at his best, and an opportunity to let us hear the NDR Big Band in full strength, full flower.

From the opening Gil Evans "Las Vegas Tango" through the Gibbs originals and forward, Frisell gives us his extraordinary versatile solo guitar style with the lush and stirring big band arrangements by Gibbs. The NDR outfit sounds just great. Jeff Ballard gets featured on the drum throne for this date and they all rise to the occasion.

What is striking is how Gibbs' charts articulate the sectional and tutti power of the NDR outfit while still allowing lots of space for Frisell in all his glory. Bill swings along in his own special way with the band, gives us beautiful note and chord choices, and shows exactly why he is a master.

He shares the space at times with some very good soloists and of course with the three-dimensional Gibbs charts.

For Frisell, for Gibbs and for the NDR band, this one excels. You should not miss it.