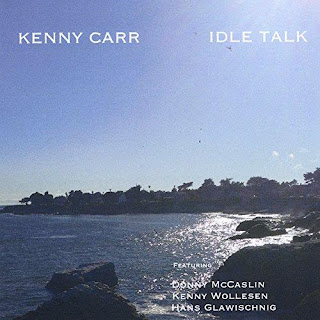 Kenny Carr? A guitarist of the electric persuasion, in the jazz camp and well-situated there as a real player after Berklee, ten years with Ray Charles, and now a burgeoning solo career. Idle Talk (Zoozazz Music) is not his first album. There are several others I am afraid I have missed. But what matters is that this one comes at you with a good band, a sound, and guitar playing that is smart, contemporary, yet rooted.

He is joined on the new one by Donny McCaslin on sax, a player who has steadily gained steam and is up there in the ranks of players in the new mainstream. Kenny Wollesen drums swingingly and nicely. And Hans Glawischnig moves along well as a sophisticated bassist who digs into the material, solos well when called upon and adds much.

The program is a set of well-hewn originals by Carr in the post-hardbop earthy mode. They set the stage for some excellent soloing from Carr and McCaslin.

Kenny Carr has schooled his good instincts for a potent guitar sound that has soul, boppish roots and a fine sense of solo weaving. He and Donny never flag for ideas.

Idle Talk satisfies on many levels. It's a great band effort, the tunes hit home, McCaslin says his say well and, most importantly, Kenny Carr comes across as a real player, a plectrician of ideas and soulfulness