Trey Gunn, The Waters, They Are Rising 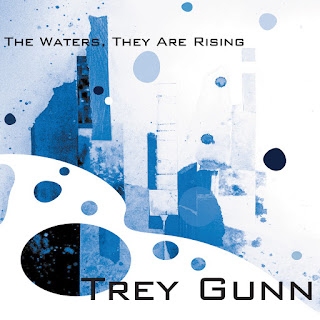 Face it, touch guitarist Trey Gunn is special. Sure he is one of the foremost players of the touch style. But he also creates sonic worlds that transcend instrumentality and speak directly to you the listener in a compositionally, improvisationally vivid way.

His new album, The Waters, They are Rising (7D 1511) gives you all that. Hauntingly.

It consists of four solo touch guitar sequences recorded live on his Security Project Tour last year. Each was meant to serve as an introduction to "Here Comes the Flood," the Peter Gabriel song, yet they stand on their own as poetic, spacy guitar tour de force statements.

But there is more on this album. Two duets with vocalist Dylan Nichole Bandy stand out, especially their version of Bob Dylan's "Not Dark Yet," which along with one other piece included on the album were part of the soundtrack for the film "Every Beautiful Thing."

Then there are four more cuts recorded in the studio. All of them are substantial.

All fit together well like the pieces of an intricate puzzle. It makes for a really ear-grabbing program, showing Trey Gunn at his most lyrical, most spacey and most accomplished.

You can get a copy by pasting the following URL into your browser: http://treygunn.bandcamp.com/merch

The voltage is there but then so is the magic. Trey Gunn travels at the forefront of those rethinking the electric guitar sound today. This is one of his very best.