Antibalas' Brooklyn Afrobeat Collective Reissue "Who is This America?" 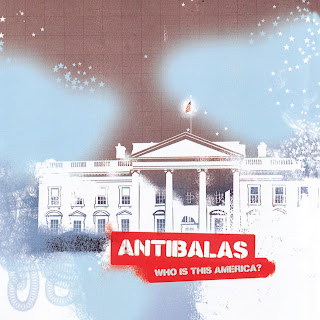 When the Brooklyn-based 17-piece Afrobeat group Antibalas first released their third album Who is This America? (Ropeadope AC 5059) in 2004, the climate here in the US was not especially open for a Fela Kuti sort of political critique of what was happening with the Bush administration and in general. Now that Afrobeat and Fela Kuti are both getting more recognition (partly due to the Broadway musical about Fela that has been garnering praise), it may be that the time is ripe for the reissue of the album. The political climate has changed (?) as well, so it's message is no longer a voice in the wilderness sort of thing.

This past August the reissue came about. The new edition of the CD has an extra unreleased track. Aside from the political commentary the album contains (which I will leave listeners to sort out and to provide their own opinions) this is a very good Afrobeat outfit giving out with the James-Brown-meets-Africa style that is pretty wonderful to my mind. Horns riff, the guitar-centered rhythm section cooks its funk up African style with percussion and drums serving up a fat groove that you expect from this music. Vocals are well done.

Not every cut is a gem, but you get 75 minutes of it, so who can complain? Get some Fela if you don't have any. Get this one too. You'll be set up with some prime movers.
Posted by Grego Applegate Edwards at 4:16 AM

Labels: "who is this america" music review, afrobeat, antibalas