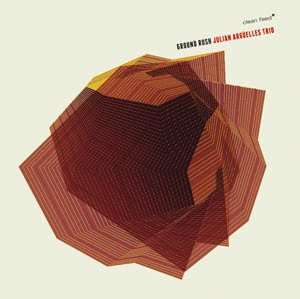 If you want to show your improvising abilities and sound to the maximum the pianoless trio of horn, bass and drums is one of the most fertile vehicles to do so. That's what tenor saxman Julian Arguelles has done on his new CD Ground Rush (Clean Feed 191). It's not just any trio partners he's gathered together though. It's Michael Formanek on acoustic bass and Tom Rainey on drums, both leaders in their own right and some sensitive and formidable ensemble voices.

They run through seven Arguelles originals and one number by the entire band. This is loose and driving postbop with nice vehicles to improvise with. Arguelles' tenor has its own trajectory. He doesn't sound like anybody much, though the conceptual approach has something in common with Ornette Coleman (and since Ornette's influence has been enormous, that can be said of many), but not the sound. Julian is very fluid and poised.

Michael Formanek digs in for this session and makes syzygy-like connections with his fellow bandmates. He is in indispensable part of the proceedings and sounds great at all times. Tom Rainey plays drums in ways that play up an accompanying role in the best sense. He's there in creative ways whether it is a free-form phrase or a swinging quietude, or not-so-quiet too.

All told, the three give out with a very good performance indeed. It should make them proud. The music impresses me, OK? For the less bombastic side of contemporary jazz with no signs of anemia, you would do well to hear this one.
Posted by Grego Applegate Edwards at 4:04 AM