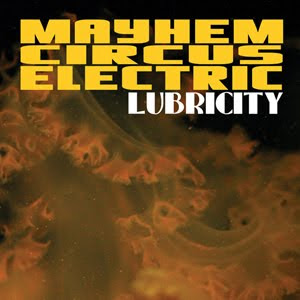 The NHIC (New Haven Improvisers Collective) have been making their own brand of avant jazz for some time now. It's adventurous fare with a kind of territory band approach to the avant that is healthy and goes its own way. The group as a whole varies in terms of its members and the degree to which material is worked out on any given occasion.

Today's CD is by an NHIC offshoot with a more electric bent than the NHIC as a whole. It's a seven-man outfit that includes two guitars (one of them Bob Gorry, NHIC founder), sax, keys, bass guitar, bass clarinet and drums. Mayhem Circus Electric is what they call themselves and Lubricity (NHIC 005)is the title of the disk.

There are eleven jam-like vehicles, which take something from the electric Miles Davis concept on one hand, and to my ears, the Captain Beefheart ensemble style of his classic period.

So in other words there is a loose avant rock-funk feel with multiple collective solo work and there is also some of the jagged Beefheart angularity.

These are mere stepping-off points. Mayhem has a local DIY sensibility that gives the group (like the parent NHIC) a distinctive lack of the expected licks and textures that you might hear in the main currents of avant-dom. Collective is the operative concept in play on these pieces. No one much solos in the singular sense yet everyone is soloing throughout.

Lubricity has conceptual flair and group dynamic heft. And they seem to be enjoying every moment of the experience too. I say bravo to all that!
Posted by Grego Applegate Edwards at 4:18 AM