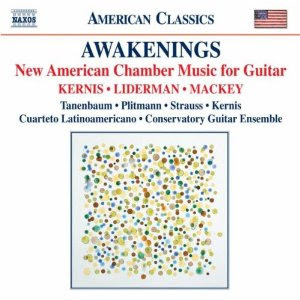 Aaron Jay Kernis's "Two Awakenings and a Double Lullaby," written for soprano, guitar, violin and piano, combines an advanced harmonic standpoint with both rhapsodic lyricism and echoes of the post-serialist past. Kernis brings together the appealingly sensuous sound of the ensemble with poetic texts about the innocence and wonder of a child's first awakenings into the world. The second half of the work evokes the "putting-to-sleep" side of parenting by giving voice to "calling forth the angelic watch," typically a part of traditional Euro-American lullabies.

Jorge Liderman's "Aged Tunes" contrasts with a rhythmically lively piece for string quartet and classical guitar. This one has some interesting guitar parts and a neo-classical charm. The sound of the quartet with solo guitar has such presence you wish more had been done with this sort of texture since the days of Boccherini. As it is we have this piece and it stands out as a good example of inventive writing that is modern and directly communicating at the same time.

The final piece brings in a full guitar ensemble, both electric and classical guitars in a very interesting sort of post-minimalist confluence. Steven Mackey's "Measures of Turbulence" creates gong-like sonorances through ingenious uses of ensemble harmonics and some striking classical guitar ensemble passages that contrast vividly with the electric scoring. It is most definitely a piece of memorable music. Mackay takes on where Fripp's League of Crafty Guitarists leaves off. Ostinatos, chordal and multi-voiced writing immerse the listener in a fascinating ever-shifting soundscape. This work alone would be worth having even if the other two works were not interesting as well, which they are.

Performances and recording quality are both excellent. David Tannenbaum plays the guitar parts on the first two works and he sounds quite good. He conducts the San Francisco Conservatory Guitar Ensemble for the Mackey work and the players shine forth nicely.

The program has a satisfying flow to it and will most certainly be interesting to those who want to experience contrasting compositional approaches to the contemporary concert guitar both as a solo and an ensemble instrument. Recommended.
Posted by Grego Applegate Edwards at 4:04 AM