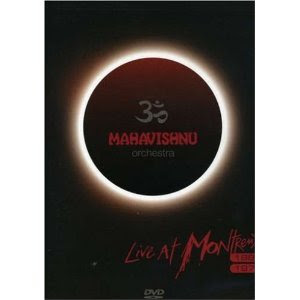 The musical style of John McLaughlin has taken many zigs and zags since his emergence with Tony Williams and Miles Davis in the late ‘60s. The original Mahavishnu Orchestra sent guitarists, drummers, keyboardists and violin wielders to the woodshed to try and catch up. The band had such technique and fire! McLaughlin was not merely technically amazing; his rhythmic-melodic amalgam and the group concept went way beyond what anybody had done before. Then that band broke up and new Mahavishnu groups, Shakti and all kinds of permutations in his approach occurred over the next 30 years or so. But nothing was quite like that original band. It was natural for some to be disappointed with the later incarnations of the group. Nothing quite matched that first burst of flame. Yet looking back those realignments in the Mahavishnu personnel and repertoire were not nearly as big a letdown as they seemed at the time.

This brings us to a two DVD set that has been out for a bit but I am only now getting around to reviewing. I speak of Mahavishnu Orchestra Live at Montreux 1974, 1984 (Eagle Eye). First off, for a very modest price you get hours and hours of music, 234 minutes to be precise. The 1974 disk alone contains a 45 minute or so video of the band in action and another 70 plus minutes of additional music for audio only. Today we deal with that first disk. The second will be covered later.

The picture quality and sound are first rate. The 1974 group added a string quartet and several horns, mostly for orchestral texture. This was the band with violinist Jean-Luc Ponty, who of course added another astoundingly proficient improvising voice to the mix. Michael Walden filled Cobham’s shoes with bravado and manages here to seem nearly as boisterous as the indefatigable Billy.

The music gives wide scope for some astounding McLaughlin soloing and so also for Mr. Ponty. The two are in great form! Musically the material consisted of new numbers the band had worked up and a few pieces from the earlier repertoire. No LP release of the time came close to giving a representative view of what the band could do. This DVD does that well and the 1974 concert has a great deal of fine moments. I was less captivated by the 1984 disk, but that is a story for later. McLaughlin fans at any rate should not hesitate to find this one. It should give you many hours of enjoyment. Anybody new to McLaughlin who hasn’t listened to Birds of Fire by the original Mahavishnu might do better to start there.

Originally posted on March 26, 2009 at www.gapplegate.com.
Posted by Grego Applegate Edwards at 5:25 AM