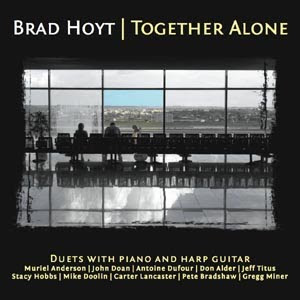 The harp guitar, judging from surviving instruments and its appearance in the catalogs and brochures of guitar manufacturers of the era, was not an especially unusual thing to find among the instruments of the American homefront in the years around the turn of the last century and some time afterwards. By placing the harp strings semi-crosswise and building the harp resonating chamber to jut outwards at and angle from the guitar neck, both the six strings of the acoustic guitar and the multiple strings of the hammer dulcimer type harp could be accommodated.

Brad Hoyt has made quite an interesting album of duets with himself playing the piano, ten different artists appearing on the harp guitar, and a final piece where Brad plays both the piano and the harp guitar.

Together Alone (Harp Guitar Music 009) is the result. It's a very interesting disk. The music sometimes has the mellow limpid ambiance of new age without the vapidity. Pieces range from country- and folk-like strains to those with a little of the jazz element, from reggae to a more-or-less classical chamber stance. And everything in between, I might add. It shows off the sound of the harp guitar in ways that have musical substance and gives you plenty to hear and appreciate.

This may be off the beaten track but after hearing it a few times you might find yourself looking around for an instrument. And the listening is quite pleasurable.
Posted by Grego Applegate Edwards at 4:02 AM