Robert Branch and His Fusion Pyrotechnics 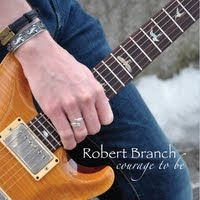 I'll be the first to admit that Fusion can have its excesses and banalities. There are formulas to fall back upon, instrumental idols to imitate and so forth. In that it is prey to the perils of just about any music that strives for some form of popularity, which includes most of the music being made today.

So when new faces come on the scene, many times they exist as the influenced, rather than a potential influence or at least an original of some sort.

Robert Branch is a new guitarist to me. His CD Courage to Be (self released, no release number) puts him firmly in the instrumental fusion camp. Minneapolis serves as his home base.

Beyond those basics there is the music. Sometimes his sound has a definite Allan Holdsworth violin-like singing to it; sometimes his originals reference Pat Metheny, and no doubt there are other influences. The point is what he does with all of it and the first answer is that he seems to be carving out a rock-based style that could be traveling toward a more original stance.

He has some of the machine-gun fire technique that many players in this realm have developed. What's interesting to me is what phrases he plays. He goes with rock licks and builds outward from them. How much outward he will build the future will reveal. For now this is a very accomplished, sophisticated effort that has plenty to like about it.

Keep going Robert Branch. We'll be listening (if the creek doesn't rise in the meantime!)
Posted by Grego Applegate Edwards at 4:08 AM