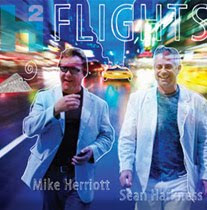 H2 is Mike Herriott on flugelhorn and Sean Harkness on the guitar. They form a potent duo on their first release Flights: Volume One (no label listed). They are joined by bass and drums on four numbers and trombonist Mark Miller on one; the rest (five more) are pure duets.

First of all they have a sound, both individually and collectively, that is distinctive. Harkness gets a rich, full sound with the electric and what sounds like a touch of chorus. Herriott gets a warm, mellow and burnished tone on his flugel, a little like Kenny Wheeler in that sense. Sean's playing is lucid and nicely projecting through well-chosen lines and particularly effective harmonic voicings; Herriott plays with a laid back, cool demeanor, but he can get some fire going too. The song material is completely comprised of originals. Eight are by Harkness, two by Herriott.

The duets can be ravishingly beautiful and have that extra something to them that gives you pause. There are changes that work well and avoid the hackneyed; melody figures that stand out; improvising that fits each piece well. The numbers with rhythm vary from some up samba to rock-inspired funk. Nothing here is "smooth" in that sort of watered-down sense that term implies to me. There is very good musicality all the way through the disk. I like the duets best because they give the two a chance to interact without a safety net, but it all shows some definite individuality.

Guitarists take note (and those of the wind persuasion as well). Here are two cats that are well worth checking out. I hope they continue on from this auspicious beginning and go on to grow and evolve together as a team.
Posted by Grego Applegate Edwards at 4:06 AM