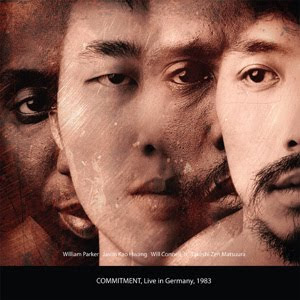 Based on the No Business release (NB CD 14-15) of the complete 1981-1983 recordings of the avant jazz group Commitment, I realize I missed out on a very distinctive conflagration the first time around. The 2-CD set includes their studio date of late 1980 and a live appearance from 1983 in Germany (the latter unreleased before).

The band had an interesting aural presence partially due to it's not entirely standard instrumentation: reeds (Will Connell, Jr.), violin (Jason Kao Hwang), acoustic bass (William Parker) and drums (Zen Matsuura). The sound is greatly abetted by William Parker's enhanced sound staging, especially on the live date. He's out front throughout and plays ensemble passages when not engaged in the flowing free bass anchorage for which is has become renowned.

The studio date takes up much of the first disk and has less expansive, more compact improvisations. The live date stretches out more and has the advantage of two years of the band's history under wraps. They seem more attuned to one another and the expanded time frame lets them flow to and from each interlocking arranged-improvised musical cell at a more leisurely and considered pace.

It's both individually and as a ensemble, especially the latter, that they distinguish themselves. The sound texture of the group in full sail is dramatically powerful and nuanced. The players as individuals have well developed musical personalities. Parker is assertive and sound-color oriented, a moving force and a direction taker throughout. Matsuura has a tumbling drumming style that has energy and freedom. Connell can and does catalyse the proceedings with his energy travels on flute, alto and bass clarinet. Hwang's violin is sharply cutting when it needs to be and blends well with the melodic principals when engaged in ensemble improvisation or pre-worked line weaving.

Having the studio and the live date on two CDs furnishes for you a kind of mini-retrospective that shows the band's initial potential and its realization on two occasions. If only they stayed together even longer, they might have accomplished even more in the improvisatory realm. For a relatively brief moment in the '80s they showed themselves as one of the most important improvisatory ensembles of the era. You can hear why on these sides.
Posted by Grego Applegate Edwards at 3:59 AM