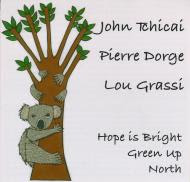 What is it about the most modern jazz that puts some people off? I was watching a sit com the other night and one of the characters said, "Jazz is the sea urchin of music," which implied that it was something no one wanted to "eat." Not true!

Preparation is important. Getting used to the sounds and structures involved is a second factor. Free improvisation or post-bop assumes a certain familiarity with what went before. At least it helps to understand what the music is an extension and commentary upon. Second, “new” jazz (some of it 50 years old by now) can use harsher textures and rhythms that are not easy assimilated by someone used to a four-square overtly stated beat. There can be a cacophony that remains highly expressive but perhaps a little disconcerting if you are not used to it.

Today’s CD has a fully modern, freely articulated bent, yet it seems to me that it might be easier for the novice to grasp than some recordings. We have two Danish master improvisers, saxophonist John Tchicai and guitarist Pierre Dorge joining with US drummer Lou Grassi in a tuneful set that has a fairly laid-back approach, accessible rhythmic pulses much of the time and a musical logic that shouldn’t be hard to grasp. Hope is Bright Green Up North (CIMP) has a front line that has played together for quite a while, mostly in Pierre Dorge’s New Jungle Orchestra (mentioned in an earlier blog page). They both go their own way stylistically. There’s originality and imagination in everything they do. Lou Grassi effectively anchors their melodic and improvisatory journeys with solid drumming. What’s interesting to me is that while most people should find this disk easy to understand, the group is in no way watering down its music for wider acceptance. Tchicai and Dorge are doing some very nice things here. The CIMP recording can be found on the website listed in the links column.

Originally posted on March 23, 2009, at www.gapplegate.com/musicalblog.htm.
Posted by Grego Applegate Edwards at 6:04 AM