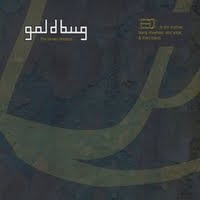 There is most definitely a trend out there, and Goldbug's The Seven Dreams (1K Recordings 016) squarely places itself in the center of it. Take the riff-rock psychedelia that comes out of Miles Davis' seventies electricity and combine it with the spaced soundscape orientation that Robert Fripp and Brian Eno pioneered. Now that doesn't mean that there are large grafts of borrowed riffs and motives from the original plants. Far from it. Goldbug make their own music and it's a goodly original kind of end result they get.

Goldbug is a studio project that centers around Eric Slick on drums (Adrian Belew), Barry Meehan on bass, Theo Travis on reeds (Soft Machine Legacy) and Tim Motzer on guitar. They aren't afraid to create textures and envelops that have electro-acoustic transformations as their basis, and they combine that with a group orientation. There are grooves, sax and guitar solos that fit sometimes fragmented lines into the overall matrix, and there are loose freeplay passages that create a mood. The objective is to make music that hits you in blocks of atmospheric sound.

They succeed in giving you a program that has a thoughtful way about it, yet has a great store of power in reserve that you can feel the presence of in various parts of the work. Perhaps next time they will unleash a bit more of that power, even if it means disturbing the brown study of the cosmically oriented listeners. For now that doesn't matter because the music is most stimulating as it is.
Posted by Grego Applegate Edwards at 4:36 AM