"The Other Parade" by Bassdrumbone: Helias, Hemingway, Anderson 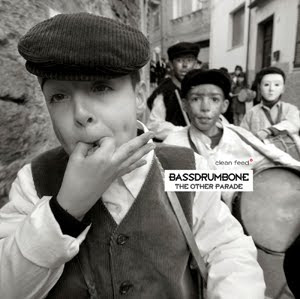 Bassist Mark Helias, drummer Gerry Hemingway and trombonist Ray Anderson played together around 30 years ago. Since then (and before then too) they have racked up scads of kudos through their many recordings and appearances. You either know that already or you don't. Regardless, their new collaboration as Bassdrumbone, The Other Parade (Clean Feed 223) will get you up to speed in a hurry.

It's music that is both avant and in the jazz tradition. You hear echoes of NOLA parades and you hear the sound of jazz today.

Each player is an exclamation point in the sense that they have given their respective instruments their own individual identity and can and do compose some very worthwhile music to improvise off of. The composer's chores are shared equally by the trio with three apiece. They put the in/out approach into action and pave the way for the three-way musical conversations that follow.

The Kismetic (fatefully inevitable) rapport between the three produces some of the finest modern jazz I've heard this year.

Don't be fooled. Great artists like these are at the first rank of their instruments--and that, in spite of a bassoon-trombone sniper who weighed in on a comment some months ago--is an achievement that ranks equally with, say, the best tenors or the best pianists.

This album gives you the warp and woof of why that is so. Anderson forcefully swinging with a bold tone and subtle nuance, Helias punchy and smart, Hemingway a master of timbre and pulse, these are three of today's mothers. Check this one out and I think you'll be very glad of it.
Posted by Grego Applegate Edwards at 4:41 AM