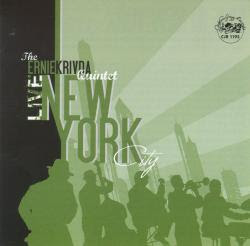 February 20, 2009—Tenor saxist Ernie Krivda has been on the scene for years. If he has not gotten a huge amount of recognition for his talents, it is not for want of consistent excellence in performance. He can be counted on to come through with energized, full-throated improvisations seemingly whenever the opportunity presents itself. His recent Cadence release Live in New York City (Cadence Jazz 1195) is a case in point. Captured by band guitarist Bob Fraser one January night at Sweet Rhythms in NYC, Krivda and company turn in one of those performances where they do not so much think of the recording in progress and let loose with unselfconscious mainstream jazz with hell-for-leather intensity.

The quintet is primed and the audience urges them forward in a really nice set of originals. Trumpeter Dominick Farinacci and aforementioned guitarist Fraser contribute first-rate solos, and Krivda insistently brings out his exuberant, extroverted note-streaming at its best. He has the hard lyricism of a Coltrane, but his own sound and musical vocabulary. This is a band on one of those nights where it all comes together. You’ll wish you had been there. Check the Cadence site (www.cadencebuilding.com) for more information.
Posted by Grego Applegate Edwards at 5:04 AM