The Necks' "Hanging Gardens": Play it Again Sam, and Again, and Again 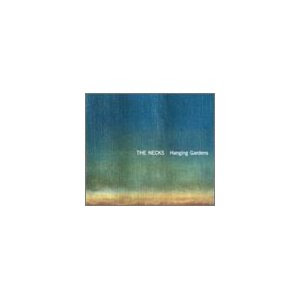 Australia produces its share of music worth hearing. The Necks are one of its more interesting exports in recent times. They are a keys-bass-drums trio that specializes in a kind of jazz-rock minimalism with long trance-like grooves that owe something to the early, more rock oriented minimalist endeavors, like Riley and Cale's Church of Anthrax. Yes, and the classic first phase of electric Miles Davis too.

Their 1999 Hanging Gardens (Fish of Milk 02677) shows all that pretty clearly. It's a one-hour-long cut. It begins with a high-hat tatoo and bass riff that pretty much continue through the piece. Chris Abrahams comes in on Hammond as well as piano, electric piano and various other keys. After a while I realized that the whole project took more than a little something from Miles Davis's In A Silent Way, especially the Hammond work combined with high-hat pulse. The differences are just as dramatic though. Of course there's no ravishing Miles, but really no solos at all. The riff and the drums continue ad infinitum and the level of the music gradually raises through the sound color ambiance of the keys and, sometimes, some counter riffs.

It's looking to develop a trance-through-repetition effect. That's what the Necks do so well. In spite of the fact that an hour is a rather long time to keep up a particular schtick, the Necks' strong suite is they sustain it by various event clusters, an additional variation on the riff, for example, a section where the drums lay out, prepared piano rattle-drones, and so on.

In the end, the Necks create a musical world you can inhabit gladly, provided you do not impatiently await some sort of foreground (soloing). It's a long mesh of background complexities brought forward. But it would fail utterly if it didn't evolve over time in ways that keep one's interest. It does not fail!
Posted by Grego Applegate Edwards at 3:42 AM