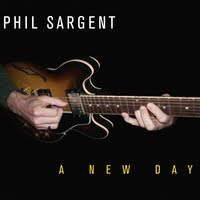 With all the influences bouncing about in guitarland these days, we have today a practitioner of the art that doesn't wear his influences on his sleeve. I refer to Phil Sargent. His album, release just this month, drives that point home.

A New Day (Sargent Jazz) puts Mr. Sargent in the company of a readily responsive bass-drums trio context with added keys on two tracks and the quite pleasing wordless vocals of Aubrey Johnson. Songs generally feature Ms. Johnson taking the lead melody and Phil doubling or accompanying her. There are seven Sargent compositions represented and they are lyrical, melodically distinctive and quite attractive. They occupy the interstices between fusion and electric jazz. Phil's playing is quite impressive. He alternates between sub-shred subtleties and melodically oriented fuze-shred. He is an true artist of lyrical yet sometimes forceful lining. He sounds modern without sounding anything more than obliquely influenced by those who have great cache in guitar circles these days (Metheny. Abercrombie. . .).

A New Day gives you a damn fine set. It has joy, it has a quiet intensity and it has very expressive musical content. This is music for those who love well-developed, sophisticated electric jazz. Well worth hearing!
Posted by Grego Applegate Edwards at 4:25 AM