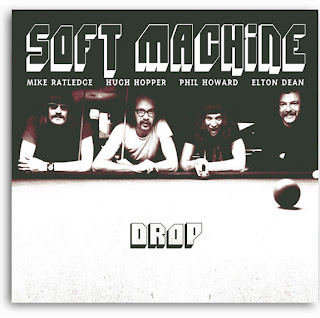 March 4, 2009—When an established working band changes a member the result is unpredictable. And when that member is the drummer, the entire attack and direction of the band can alter dramatically. The classic Coltrane Quartet, for example, sounded quite different when Roy Haynes substituted for Elvin Jones. The same thing can be said about Soft Machine in 1971. Original founding member, singer and drummer Robert Wyatt was gone. In for a time to replace him was Phil Howard, a musician with a very different approach to time. We can be thankful that the Howard version of the band was faithfully captured on tape while on tour in Germany that Fall for a full hour of music. This recording of the group in full flower has just been released for the first time on MoonJune Records.

Drop shows vividly what can happen when the chemistry of the group alters. Howard was less concerned with laying down a rock groove and was more of a free-floating, boldly bashing, loose-limbed dynamo. He’s in and out of time on this set, cajoling and catalyzing band members to play with high energy and driving them a bit more over the top than they had been used to with Wyatt. It inspires reedist Elton Dean to blow harder and less introspectively; it gives Mike Ratledge an increased number of rhythmic options in response to the wide wash of accents laid down with drums and cymbals; and it challenges bassist Hugh Hopper to become ever more of a rock-solid anchor (which he was anyway) in the looser dialogue that develops.

This band just doesn’t groove as much, but we have that in abundance with the Wyatt version of the band and, later, with the equally brilliant drumming of John Marshall. But that is OK; there is plenty of all that. Drop gives us a glimpse of what Soft Machine was all about at the time, and what they might have become. It’s a valuable document in the evolution of the band and a very listenable excursion into the higher realms of jamming. Soft Machine aficionados will jump at this one; those new to the band who like a free rock approach will appreciate it as well. It’s a nicely different moment in the band’s relatively long tenure. A good recording can take us back faithfully to a slice in time. This one really does that and we get something to ponder in the deal. Give it your ears and you’ll be rewarded.
Posted by Grego Applegate Edwards at 7:17 AM