A New One From Carlos Barretto Lokomotiv 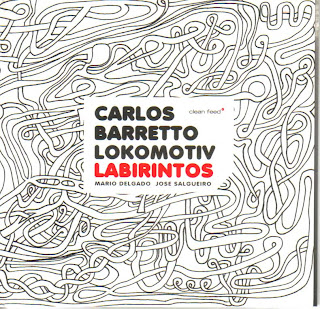 The Carlos Barretto Lokomotiv is a modern-day Portuguese equivalent of the old Gateway Trio, meaning that the music is ambient, electric, freely played, with a rock component and plenty of improvising. Their new album Labirintos (Clean Feed 179) showcases their music with recorded brilliance and it engages from beginning to end. The compositional vehicles are solid and interesting, all penned by Mr. Barretto, with the exception of one collective improvisation. They help create the mood and tone of the set, which is forward moving and gutsy or, alternately, more reflective and seeking a sheer sensuality of tone.

Carlos plays a very nimble and tasteful acoustic bass and heads the outfit. He is one that can bow with grace and good tone and his pizzicato solos are right on the money. Mario Delgado plays in a modern sounding electric guitar style, with good use of space and the ability to make musical statements that bear up under continual listening. He can rock or string together a solo of a freer-er sort without recourse to cliches. Drummer Jose Salgueiro swings, rocks and freetimes his way through the set with sophistication as well as push.

Here is yet another example of a very good group on the Portuguese scene. Thanks in great part to Clean Feed, we get a gradually unfolding picture of a musical center, not in any way a backwater, but rather a home for a vital group of improvisers. And Lokomotiv is right up there with the best of them.
Posted by Grego Applegate Edwards at 4:09 AM