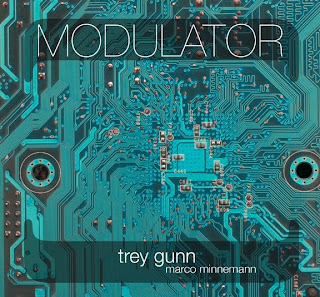 As was discussed in our interview with Trey Gunn several days ago (see below), Modulator (7d Media 1011) was created in novel circumstances. Marco Minnemann recorded a 50-minute drum solo with his own rhythmic muse guiding him. It's free ranging and very exciting drumming. He challenged multi-instrumentalist, touch guitarist and musical composer-conceptualist Trey Gunn to create a musical work based on the solo, using only Gunn's quite fertile imagination and the flow of drumming from the original track.

Trey responded with some of the most ambitious, interesting and satisfying music I've ever heard in the post-prog mode. Using guitars, touch guitars, bass guitars, keys and samples, he painstakingly built up a piece of orchestral dimensions. The stream of consciousness aspect of the drumming helped lead to a work that traverses an enormous amount of territory: rocking passages, incredibly complex rhythmic-melodic segments of rare beauty and interludes of reflective charm. It's not easily described because it has so much going on musically.

This is the kind of complex yet directly accessible music you could listen to for years and still get more out of each time. Every listen for me hits my ears in a different way than before; I hear more connections and underlying pattern and so enjoy an ever more rewarding listening experience. I would have to say that this one is a masterpiece of sonic sprawl. And there is some incredible guitar work, too. It's just fabulous!
Posted by Grego Applegate Edwards at 4:17 AM