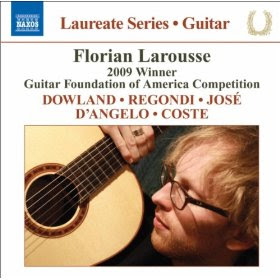 French guitarist Florian Larousse won the Guitar Foundation of America Competition in 2009. One can hear why on his wide-ranging recital disk (Naxos 8.572565). The program covers a broad spectrum of pieces in the repertoire: a little John Dowland, 19th century composers Giulio Regondi and Napoleon Coste, transitional 20th century figure Antonio Jose and a modernist, one Nuccio D'Angelo.

The first thing that strikes me about Larousse is his beautiful tone. It sparkles. His phrasing is astonishingly fluid, no matter the style at hand, and he shows an interpretive knack that is on a par with the best of the modern classical pianists. That is to say, his rubato is unexaggerated, his tonal nuance subtle and varied according to the needs of the composition.

Jose's Sonata (1933) showcases Larousse's finessive flair in a wonderful way. The sonata's traditional Spanish guitar passagework segues smoothly back and forth in alternation with the more contemporary sounding motifs. He makes of it all an organic unity that breathes life into the music and lets you fully appreciate the beauty of the sonata.

Mr. Larousse does not choose to wear his technique on his sleeve. All that is subjoined to what is important: the composition at hand and the most expressively subtle realization of the notes as the composer conceived of them.

Larousse's considerable talent and a selection of lesser performed gems from the repertoire make for excellent listening. It is a most successful and attractive outing!
Posted by Grego Applegate Edwards at 4:30 AM