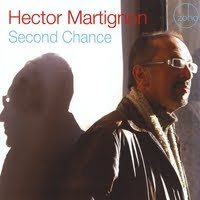 Martignon's pianism is quite in evidence on this disk. He has both rhythmic drive and harmonic-melodic sophistication. His band here is excellent. Ludwig Afonso stands out as a drummer steeped in the Latin and the jazz side of the equation. Reedman Xavier Perez and trumpet-fluegelist John Walsh add nice solo work. Bassists Armando Gola and Edward Perez both have that post-Jaco line-weaving strength (though there is also some steaming upright on "Alone Together;" I'm not sure who is playing when) that spices the proceedings considerably. And then the guest spot by Edmar Castaneda on harp (for "Coqueteos") can only be classified as brilliant! Traditional South American (Colombian) harp combines in his solo with a jazz context and it's quite impressive. I would love to hear more of him.

But this is Hector Martignon's outing and he shines brightly, while showing us the flexibility of his musical leanings. There is samba and other Latin feels mixed with nicely turned fusion elements and well constructed compositional lines. Listen to their version of Mancini's "Hatari" and Hector's piano solo on it to find a congenial first entrance into this fine set. Mr. Martignon gives us some very good music on Second Chance. It is music to live with, happily.
Posted by Grego Applegate Edwards at 4:15 AM