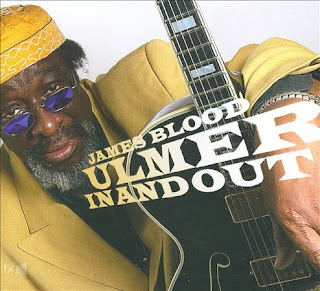 There is the blues and there is James Blood Ulmer. Do not confuse the two. Mr. Ulmer has been an artist who can go in any number of directions over the years. Funky things, more outside electric excursions, and music that has a rootedness in the blues, but really is James Blood Ulmer music.

Some of this is quite clear in his recent album In and Out (In and Out 77100-2). He plays guitar in his own inimitable way. It is not blues guitar exactly, at least in the sense of the urban blues traditions coming out of the '50s and beyond. The same goes for his vocals and his songwriting. These are songs sometimes drenched in the blues. Like Hendrix before him he flirts with the blues but rarely actually directly launches into the medium per se. Now if you don't care for definitions of what is or isn't in cases like this, I don't blame you. The point is that he should not be pigeonholed because he has his own thing going on.

In and Out gives you several sides of the Ulmer approach. He's working with a trio of himself plus bass and drums and they kick things along nicely. Mark Peterson plays both the electric and the upright in ways conducive to the Ulmer bag; drummer Aubrey Doyle is right there as well.

There are root-boppish numbers, mostly instrumental, a few flights into the stratosphere for his guitar, and rooted, blues inflected rock-funk of a high order. If I once called him a sort of John Lee Hooker for today (in a Cadence review) it was meant in terms of how he can pare down to the elemental core of soulfulness when he chooses, saying-playing more with less.