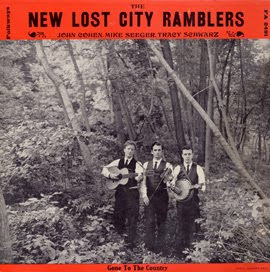 February 23, 2009—As I greet the morning sun and another day, I am accompanied by the sounds of a music not often covered on these pages, but no less appreciated for that.

Sometime between the 1700s and the 20th century a new music sprung out of the hills and dales of Appalachia as well as far and wide in the surrounding area. It was born of a life adapted to this land and the mixture of styles that various immigrants carried with them when they arrived, not to mention sheer musical imagination. I refer to country (and western). The old ballads, string-band songs and early bluegrass gave the US one of its truly original musical identities. (And of course country music thrives today, with or without rootedness in the original styles, depending on the performer.)

The folk revival of the '50s and '60s covered some of this music, and of course there were plenty of local players who kept the tradition alive in itself. Somehow those two strains found their perfect synthesis in a band known as The New Lost City Ramblers. This was a superb group both vocally and instrumentally, in no small part thanks to the talents of Mike Seeger, but everyone involved did a great job with finessing and directly communicating what was (and is) so wonderful about this music. There’s the deceptively plain, unique sound of the vocals and that special twang that many singers today have lost. There’s the wonderful fiddling, and the special picking of guitars, banjos, and mandolins.

The New Lost City Ramblers made a number of albums for Folkways in the late ‘50s-early ‘60s, then broke up. Folkways-Smithsonian has made them all available again and they are highly recommended (there's also a box set. . . ). I’m listening now to one I never had in my vinyl days, Gone to the Country (Folkways 02491). It covers songs not found much if at all on other modern recordings and those songs often have that outrageous nonsense humor and all-knowing naivety spawned from everyday local life. It’s the superb delivery of the songs though that makes this group special. These guys blew the folk revivalists into the dust. The music was and is breathtakingly alive in their hands. Thanks to Folkways you can download or buy their records online at decent prices. Use your favorite search engine and type in Smithsonian Folkways and check them out.
Posted by Grego Applegate Edwards at 6:29 AM