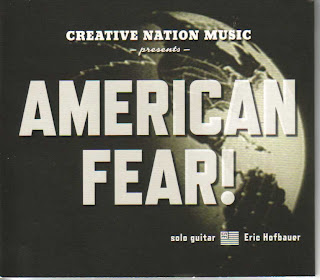 When Eric Hofbauer makes a solo guitar album, he doesn't necessarily do the expected. Take this, his second such offering, American Fear! (Creative Nation Music 019). It has the theme of, yes, right, how fear realizes itself in the various avenues of American Society. Truth to tell, while the idea is interesting, knowing what Mr. Hofbauer is after doesn't really give you a huge leg up on the music. The music does that all by itself.

I don't mean to be flip, especially not on July 4th, as I sip my early morning coffee and drift in and out of reveries on holidays past. But the fact is, Eric Hofbauer's artistry takes center stage on this recital. It is quite real. As you listen to his playing of what sounds like an archtop (though in an inner sleeve photo it looks like there are pickups, so a mildly amplified traditional jazz instrument?), and he goes from a Tears for Fears song played in two part improvisational style, separating bass lines (not walking lines, either) from treble lines in a two-way dialog of ingenuity. . . or you hear him channeling a Charlie Parker tune with a muted, buzzing sound caused I assume by interweaving a piece of paper in between the strings. . . or the kind of very skilled, in and out use of sophisticated harmonic voicings and then an odd single line or two....Eric Hofbauer, my point, is a guitarist of great creativity and imagination.

The combination of redefinitions of songs by Nirvana, Van Halen, Andrew Hill and Eric Hofbauer's own original improvisational pieces, the way he approaches the guitar, and the SOUND of that guitar make for a really interesting program. I'm impressed with him! His music may be about fear, but it reassures with some exceptional soloing.
Posted by Grego Applegate Edwards at 3:49 AM