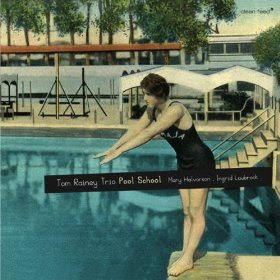 Tom Rainey's trio opus Pool School (Clean Feed 185) puts a different spin on small group free improvisation. Mr. Rainey's drums, Ms. Halvorson's electric guitar and Ms. Laubrock's tenor and soprano leave plenty of space for each other. The density of the music is not especially low but it is accommodating. Each voice operates within a space that does not overlap with the others so much as simultaneously creates complementary sound events.

It's not a blow-out, in other words, but it also is not a quasi-new music pointilistic hot potato game.

What that means is you get something of the unexpected. Rainey's drums are considered, not torrential. Mary Halvorson plays lines and chords that sound like they've been chosen with some attention to the total matrix. And Ingrid Laubrook does not solo so much as she bon mots in dialogical conversation shared by the three.

This is pretty subtle and totally engaging music. I like how everyone's roles mesh. It gives you some idea why Mary Halvorson's guitar work has been the subject of some attention. All three players, however, are making equally important contributions. It may take a few listens to absorb the totality of soundings and the thrust of the approach, but one's efforts are rewarded by immersion in a rather rarely encountered world of free improvisation that eschews showmanship for sustained sonic adventure.

That's a nice thing. Put this one on and go someplace away from your "here."
Posted by Grego Applegate Edwards at 4:13 AM