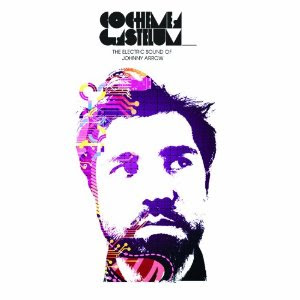 Today we have one of those recordings where, "if you like x then you'll like y." I try to put that out front sometimes because readers have a diversity of tastes. Not everybody embraces all the styles covered in my blogs. Sometimes even I don't!

That is said in no way to diminish the music for this Friday. It's by a fellow named Cochemea Gastelum (aka Johnny Arrow, it appears). He plays an electrified alto in ways that show the influence of Eddie Harris. Now that's cool, because he does fine at it. He was in the original band for the Broadway hit Fela! and he brings Afrobeat sensibilities to his music.

His album The Electric Sound of Johnny Arrow (MOWO 3210), just released Tuesday, gives a kind of Afrobeat-Latin update on those classic Atlantic soul jazz recordings of the late '60s-early '70s, where the Muscle Shoal and other Atlantic session regulars got to play some hip charts and an instrumentalist of note fronted the whole deal. Eddie Harris, Herbie Mann in a particular mode, and a score of others put out a bunch of these sorts of records, which I mostly used to discount. I've found there's more there than I previously suspected. Sure, it's geared to a particular listener base (and what isn't?), but it boils the kettle at the right temperature.

So The Electric Sound of Johnny Arrow is a bit of an updating, a making new of that basic concept.

It has some interesting arrangement and it can go from a soul ballad ("Stars") to quasi-Afrobeat horn funk ("Dark City"). It's the sort of thing that engages in a good deal of retro rechanneling, but it does so with musicianship and some bright moments.
Posted by Grego Applegate Edwards at 4:09 AM