The Pineapple Thief, "Someone Here is Missing" 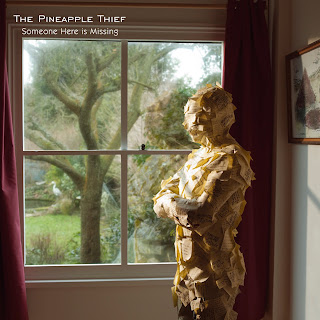 Following up on our June 16th interview with Bruce Soord of The Pineapple Thief (see below), and since a couple of weeks have gone by since the release of their new album Someone Here is Missing (Kscope 147), it seems like a good time to take a look at that album.

Well, as the interview alluded, this is a new phase for the band. They still have an edginess and the BIG sound that has gained them a loyal following.This is an album that jumps out of the speakers. The arrangements and production have dynamics and transparency, depth. The guitars kick you in the teeth when they need to, synths, piano and rhythm section slam their way through sometimes, get very quiet other times. And the vocals have terrific staging. Now that's something The Pineapple Thief have been very good at all that practically from the beginning.

The difference though is that the songs are more sharply focused. less filled with angst, but in a phrase, MORE ACCESSIBLE to those not already under the spell of this most interesting band. There's a whole youthful crowd out there that will find this music compelling.

And so all success to the band going forward. This is as usual on a high musical level. It has magic. It has drama. And it has good musical content. The Pineapple Thief have never been about cliche and so they still are quite musically rewarding. This is an indie rock masterpiece in its own way. It goes beyond its post-prog roots to occupy, if you will excuse the phrase, a post-post-prog world. They have established their own turf in another neighborhood. And it feels like home! Excellent.
Posted by Grego Applegate Edwards at 3:52 AM