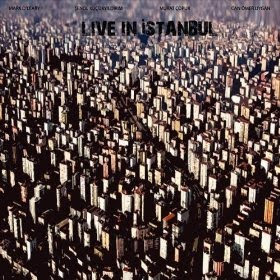 When it comes to commercial downloads you often get almost no information. Such was the case when I went on to Amazon and found a download of electric guitarist Mark O'Leary's album Live in Istanbul (TIB Productions, no # given). If I didn't already know about Mark I doubt I would have even looked at the entry. There was a cover shot, a list of the songs, a list of four musicians, obviously Mr. O'Leary and then three Turkish players. That's it. It was $3.96 so I went for it. If I didn't know that I liked Mark's playing I would not have plunked down the money. Can't beat the price though.

This is spacey ECM fusionoid music, a bit more left-field than ECM's sometimes almost new age-y releases, which is fine with me. Someone is playing trumpet, someone drums and the third person? Sounds like electric bass but it's rather low in the mix. Then again there are electronically enhanced sounds so maybe it's a key-based player? There are times when Mark has a sound that's a little bit Abercrombie-like, other times Terje Rypdal-like. Either way it's a slightly different sort of playing than on the two flat-out-out duets on Ayler with Bennink and Sunny Murray, respectively, which have been favorably reviewed in previous posts on this blog. He is not in an imitation mode, he's just a bit more soundscape-oriented here. And there's more AIR in the music.

This is music not without interest. The trumpet player and the drummer make for good company. The bass/electronics player does OK, what you can hear. There are bunches of other releases by Mark, and all I know otherwise are the two Aylers, so I cannot compare. In the end it's a pretty attractive set and shows another side of O'Leary. He is inventive and these folks are in an exploratory mood. Free fusion? I suppose that's what you could call it. Well worth four bucks!
Posted by Grego Applegate Edwards at 4:12 AM