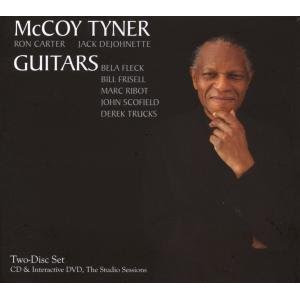 McCoy Tyner has had a great influence in the music world since he entered it in the late ‘50s. Of all the pianists of his generation, he belongs to the select few monster stylists out there. Most people reading this will know that.

He hasn’t played much with guitarists, for whatever reason. Until now. His aptly titled CD Guitars (Half Note) finds him in company with five different stringmen, plus a formidable rhythm section of Ron Carter and Jack DeJohnette. Much of the material is familiar, but that’s not the point. What happens with each segment belongs to the good chemistry law: if two musicians listen carefully and respect each other’s way of going about his business, nice things can happen. And that’s the case with these sessions.

Marc Ribot gets four numbers and he is alternatingly out and in the groove with playing that has distinct rock overtones at times. John Scofeld and Bill Frisell each show why they are at the top. Then there’s Bela Fleck on banjo, a wizard that comes off quite well in his sequence. He’s amazing! Finally jamband hero Derek Trucks gets his turn, and if you already know about him, you’ll find him into his thing and acquitting himself admirably. If you are new to him, it gives you a chance to evaluate where he is coming from and how that mixes with Mr. Tyner’s way of dealing. McCoy took a chance playing with four such disparate players. It was worth it.