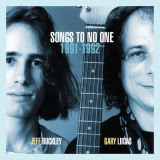 You Tube has in a relatively short time accumulated a large cache of music holdings, some with video visual, some not. If you are not familiar with an artist or a particular period, it is a great place to go to stream relevant examples.

And so it is with the Gods and Monsters lineup that had Jeff Buckley on vocals (and second guitar?), Gary Lucas, guitars, and Anton Fier on drums. There is a wonderfully evocative posting on You Tube of the band in action, live at St. Ann's Church, NYC, 1992. This is audio only, but an entire show. The sound is decent, though Fier's drumming when present is under-recorded.

What strikes one about the set is the energizing contrast between Buckley's incredibly ranging and expressive voice with the inimitable psychedelic uniqueness of Gary Lucas in the electric mode. Adaptations of folk songs ("Satisfied Mind"), altered blues and singular originals are equally stunning. Gary sets up really interesting, orchestral soundscapes based on guitar overlaying onto temporally expanded digital delay and repetition devices, or nails it directly with more straightforward live on-spot playing one-to-one into his amp, while Buckley enthralls with some incredibly interesting vocal stylings. This is one of those collaborations made somewhere in the clouds. Some eighteen years later it sounds not in the least dated.

Gary Lucas was and still is the complete guitarist with a style all his own; the same of course was true of Jeff Buckley and his vocals. Go to www.youtube.com and search for Gods and Monsters (G & M), Gary Lucas, or Jeff Buckley and you should soon find the thread of the concert. Don't miss it. Then go and track down the official recordings! Lucas is the monster here, Buckley the god! It is a superb experience, a musico-cultural artifact that should be treasured as a masterwork of the so-called modern era. That's how it hits me, anyway.
Posted by Grego Applegate Edwards at 4:07 AM