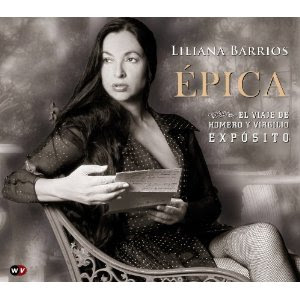 Music has that rare ability to cross borders, cultures, and time to communicate with all (music lovers), if they are open to exploring the sounds they hear. Such was what happened to me with Liliana Barrios's Epica (World Village 498036). This is an album dedicated to, and centered around, the works of the Exposito Brothers, South American masters of the art.

Now I grew up with a view of the tango heavily colored by old movies, American popular culture and Montovani. (For those who ask, "Montovani who?" he was a purveyor of sweetly sickening, string-dense mood music in the '40s and especially the '50s.) He had at least one tango album. This is the cliche sort of tango one heard back then, and bears as much relation to the musical lifeways of real Argentinian tango as the Firehouse Five did to Jelly Roll Morton.

Liliana gives us the real tango, plus a little milongo, candombe, bolero and pop styles associated with the Exposito Brothers, especially in the '40s and '50s. This is a great vehicle for the emotive, appealingly husky voice of Ms. Barrios, with accordion, strings and piano giving nicely executed period backing (and for the other genres, sometimes other instruments too, like lively drumming and upright bass for the candombe "Azabache.") In the end the songs and Liliana's fine voice triumph in Epica. If you could own only one album of tango, you would be best to skip Montovani and get this one. It is quite movingly supercharged with Ms. Barrios's artistry. And it rings true.
Posted by Grego Applegate Edwards at 3:53 AM