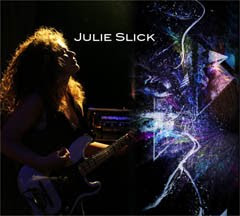 One thing I've learned (I hope more than one thing, but. . . ), that chops are important (you have to have them to as great a degree as possible) but taken only in themselves, they are not enough. So when I listen to a player, chops alone do not impress me. Technique must be harnessed to the service of music. All the chops in the world don't mean a thing if the music isn't happening.

So when I started listening to bassist Julie Slick's new first album (Julie Slick, no album ID #), I was pleased that the music is foremost. I wasn't surprised really. She's been an integral member of Adrian Belew's trio, and he doesn't hire people unless they can smoke him with their musicianship. She has chops, absolutely, but the entire album is musically strong. As Ms. Slick mentioned in our recent interview with her (see June 18th) the album naturally evolved into a series of artistic collaborations with some heavy prog rock luminaries. So you'll find she's teamed up on various cuts with Robert Fripp, Marco Minnemann, Pat Mastelotto, and others. Each number has its own sound and mood, but she's deeply immersed in some advanced rock and it all shows that Julie can think while she plays (not everybody can!). This is a group sound with good contributions from everybody and some very hip bass playing from Julie.

You listen to the album and you think, not "god, who is that bass player?" but instead, "hey, this is some nice music" and then "who is that on bass?"

Really, there are excellent sounds to be had on this one! Give it a listen. You can find out more by going to www.julieslick.com.
Posted by Grego Applegate Edwards at 3:46 AM