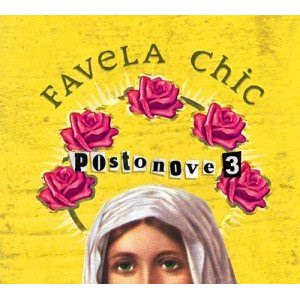 Today we look at a CD that was released in 2004 and found its way to me only recently.

It's volume three of a collection of Brazilian pop that is likely to be heard at the Paris nightspot Favela Chic, Postonove 3 (Milan 36042). Now I don't get to Paris, so chances are I wont be experiencing the ambiance of the club scene. Apparently, though, Favela Chic is known for spinning platters from diverse epochs and stylistic pockets of Brazilian music. This volume three covers in some depth the samba Brazilian groove of the 70's as well as Brazilian hip hop samba of later times.

There are great examples of batucada and carnival-school inspired music, which I love dearly. As far as the rest of it goes, the music goes from a Brazilian soul version of "Sunny" (which I don't suppose is essential) to other interesting and less-interesting combinations of musics. When this anthology is good, it is delightful. When it involves certain hybrids there are times I am less enthralled. But I don't live this music or the club scene that puts the music in a wider party context.

Interesting, anyway.
Posted by Grego Applegate Edwards at 4:06 AM