Bassist-Composer Ron Anderson and His PAK Do "Secret Curve" 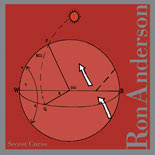 To say Ron Anderson and PAK must have rehearsed a little to get the music they do on Secret Curve (Tzadik 8079) would be to understate the situation. The music is filled with irregular figures, hairpin stop and go turns, ensemble synchronicity of a most intricate sort and all manner of asymmetrical burn-grooves. A first listen makes that plain.

Mr. Anderson does not set out to overwhelm with virtuoso hi jinks a la some of the more notorious speed fusers. Secret Curve begins and ends around the centrality of compositional thrust. The complexities are harnessed to Ron's musical vision, just like a fast movement in a classical symphony is indeed what it is, fast, because that is how the music moves, not because the music is second, that speed first.

Secret Curve highlights the playing of PAK, a trio of Ron on electric bass, Keith Abrams, drums, and Tim Byrnes on trumpet, French horn and keyboards. The music gets reinforcement and color-depth with the help of some key guests: Anthony Coleman on piano, Jerome Noetinger, electronics, Eve Risser, piano, Tom Swafford, violin, and Stefan Zeniuk on reeds.

The trio is at the heart of the music, though. Anderson's throttle bass has extraordinary moments of centered line building which get plenty of interpretive, complementary drive from Abrams' drums. Byrnes' horns and keyboard fill in with harmonic and melodic top-parts that have style and distinction. The ensemble expands and contracts with the entrance and exit of the guest performers.

This is a downtown thrash-jazz tour de force. There are not a lot of solos but rather ensemble excellence. The music expands upon the two Z's--Zappa and Zorn--at their most intricate and frenetic. In the end, though, the music has a Ron Anderson sound to it. This is HIS music. This is original music. This is exciting music.

Anderson plays some impressive bass. The entire ensemble excels in ever-building cascades of thrash ecstasy. The pieces bear up well under repeated listens. You should most definitely hear this one!
Posted by Grego Applegate Edwards at 3:40 AM