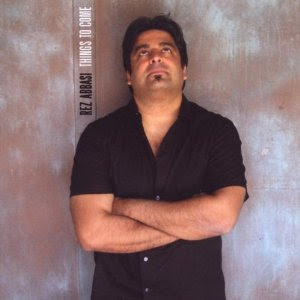 Readers of my blogs know that I do not restrict myself only to the very latest releases, the flavors of the month. The idea is that good and great music may not have been recorded and released yesterday, and so it is never a bad idea to consider something that's been out for a while.

Such a recording is guitarist Rez Abbasi's Things to Come (Sunnyside 1236). It's Rez on guitar with the nucleus of the Indo-Pak Coalition that has been so fruitful for all concerned: Rudresh Mahanthappa on alto, Vijay Iyer on piano, and Dan Weiss on drums. Also appearing on this album are Johannes Weidenmeuller on acoustic bass, Mike Block, cello, and some beautiful vocals by Kiran Ahluwalia.

A look at Google makes it clear this album has gotten quite a few reviews. So I wont belabor the obvious. What's important: the wide-ranging chromatic soloing by Rez, Rudresh and Vijay, Peter's rhythmically advanced drumming and Kiran's classical Indo-Pak oriented vocals. This is Indo-Pak fusion, which is to say it is informed by the classical South Asian tradition. "Informed" is probably a good word because Abbasi and company have very much incorporated that influence into their own way of playing and improvising. The compositions sometimes have the melodic motion of the Carnatic tradition, for example, but essentially with differing note-cells. That same can be said for the rhythm. This is first and foremost a modern jazz form, electric, fused. It is a wonderful showcase for the unique style of the principal soloists--Rez, Rudresh and Vijay--and a platform to incorporate Ms. Ahluwalia's angelic vocals.

It is essential listening if you want to know what modern jazz has going for it. Rez and company have carved out their own niche and it is a vital one.
Posted by Grego Applegate Edwards at 4:06 AM