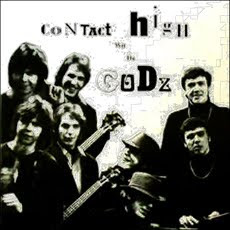 There is an art to being rather awful. If you can be awful in a way that is actually good, you've achieved the level of art. The obvious examples would be in the proto-punk groups like the Seeds and Quotation Mark and the Mysterians, both groups that managed to make ten-thumb instrumentality and adenoidal vocals into something transcendent.

While such groups were wallowing on the charts and scoring a hit or two, there was the underground version of such bad-as-good aesthetics. The Fugs, of course, made a point of being a poetic parody of bad rock. Then there was the Godz, whose 1966 Contact High brought the genre to new lows-highs. That album, in all 25 minutes of glory, is the latest reissue in ESP's revival (ESP 1037).

I first heard the Godz on my mother's FM radio. It was when underground radio found a home for a time on that frequency set (and I suppose in some ways it's still alive if you look for it). WBAI had a hip afternoon show and I remember distinctly they played "White Cat Heat" from the Contact album. It's some psaltery and guitar thrumming, bass blurts and the band representing vocally a lively cat fight in some would-be alley. It's probably their very best cut--a mini-theater of the absurd. Well of course "White Cat Heat" is a part of the reissue and it still sounds sublimely ridiculous. For the rest there is some hippie jug-band folkishness, some more or less sincere attempts to put forward a song or two, a Hank Williams "cover" and a few more freak outs.

This was an album only ESP would have put out at the time and it is a piece of underground history of the NY scene in 1966. I do not judge it harshly because I think that the jug-junk-band psychedelia put forward on the disk is still charming. Larry Kessler's electric bass playing is some of the very worst I've ever heard. So bad in fact it is good (almost). He's playing a Gibson through some tube amp and the strings sound detuned to the point where his attacks on the strings give out a sound like a jugband jug or a washtub bass in distress.

I find it a kind of landmark in anti-slick pop irony. The Fugs might have done it better but the Godz have the distinction of doing it worse. That is an achievement. Only Whitewood is more consistently god-awful, and their album has been out of print for a long time. So here's your chance to dig something that was intended to turn the pop world upside down. That it didn't quite do that is further indication of their "success."
Posted by Grego Applegate Edwards at 4:00 AM