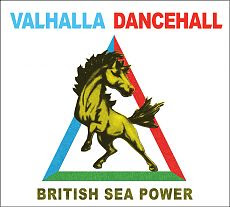 Those who float their boat on the indie-alt rock sea know it is a vast body of water. I wouldn't venture to guess how many releases there are every month, but "many" would be an answer that would not be incorrect. To keep track of it all takes dedication. It would be a full-time job--and in fact it is that for some. I don't claim comprehensive knowledge. I do rely upon my ears to get acclimated to anything new, though.

The new release by the Decline of British Sea Power, Valhalla Dance Hall (Rough Trade), to my ears brings more thrust to the songwriting than was the case for the very first albums. Songs are more compact, symmetrical and accessible to a general alt crowd, I think.

There is the big wall of sound going on, guitar centered, which I find interesting. The lead guitarist has a melodic sense that goes beyond the lick stage by a good margin. Vocals remain at the distinctively alt-idiomatic level, where they've always been.

All in all, an attractive effort. They had a sound on their first albums; they have one now. It's a bit different--there's more of a pop-alt veneer, but the overall thrust continues to be quirky. It should float the boat of many listeners.
Posted by Grego Applegate Edwards at 3:55 AM